Part 4 of a Series: Evolution or Intelligent Design

In the first 3 parts of this series we discussed the types of evidence that can be considered in a court of law (A Preponderance of Evidence), some of the key arguments against evolution (The Trouble with Darwin) and one aspect of the massive fraud that accompanies Darwin’s theory (The Icons of Evolution).

I want to turn your attention now to evidence for the intelligent design and creation of the universe, which seems to be present in virtually ALL the fields of science. You’re the fact finders, the jury if you will. Consider the evidence and decide for your self – does the evidence outlined by Lee Strobel in his book, The Case for a Creator, and presented in this series point to the spontaneous evolution of life from inanimate matter or does it point to an intelligent design? Here is some of that evidence. I’ll present evidence found in Cosmology first, followed by evidence found in other sciences as well – in later posts.

The Kalam Cosmological Argument is old, originating in the fourth century with John Philoponus of Alexandria, Egypt. Developed to refute the Greek idea of an eternal universe, the argument is well tried, being picked up by Muslim theologians when Islam took over Northern Africa.

These arguments for the existence of God eventually were passed back into Latin speaking Christianity when Jewish thinkers and Muslim theologians argued side-by-side in Muslim held Spain of the eleventh century. Bonaventure (the Italian philosopher) supported the argument in the 13th century, John Locke (the British philosopher) used it in the 17th century and it eventually found it’s way to Immanuel Kant (the German philosopher) in the 18th century.

I include all of this because there are college professors, scientists and others who will say that the old arguments for the existence of God are worn out and ultimately ineffective. They cannot, however, successfully support such a claim as you will readily see.

1) Whatever Begins to Exist Has a Cause

One would think that this first premise would be accepted by virtually everyone. After all, we can understand this intuitively – things never pop into existence from absolutely nothing. Well, except for a rabbit out of the hat of a magician, but even then we have the magician and the hat. 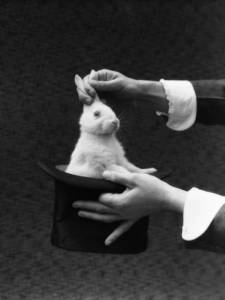 Atheists, because of the scientific evidence, are finding it difficult to deny the second premise of the argument – that the universe had a beginning. So they have begun to challenge the first. Generally they don’t try to disprove the premise, but challenge us to do so.

We have overwhelming empirical evidence to support the first premise. Think about it, do we ever worry all day at work that a rhinoceros is going to appear from nothing in the living room and destroy everything? No, because things don’t just appear out of no where. The universe just isn’t structured that way. This is a principle that is always confirmed and never falsified. We can see it in reality.

2) The Universe Began to Exist

A hundred years ago the idea that the universe began to exist at a particular time in the past would’ve been pretty controversial. The assumption since the ancient Greeks has been that the material world is eternal. Christianity has denied this on the strength of the creation account in Genesis for thousands of years. Secular science had always assumed the universe was eternal. The discovery, in the twentieth century, that the universe is not an unchanging, eternal entity came as quite a shock to the secular mind.

Today, no one seems to be denying that the universe had a beginning.

Steven Weinberg, a Nobel Prize winning theoretical physicist at the University of Texas – and an atheist – described the beginning of the universe in his best selling book, The First Three Minutes:

“In the beginning there was an explosion, and in three minutes, 98% of the matter there is or ever will be was produced. We had a universe. Not an explosion like those familiar on Earth, starting from a definite center and spreading out to engulf more and more of the circumambient air, but an explosion which occurred simultaneously everywhere, filling all space from the beginning with every particle of matter rushing apart from every other particle. At about one-hundredth of a second, the earliest time about which we can speak with any confidence, the temperature of the universe was about a hundred thousand million degrees Centigrade. This is much hotter than in the center of even the hottest star, so hot, in fact, that none of the components of ordinary matter, molecules, or atoms, or even the nuclei of atoms, could have held together.” He goes on, “The universe was filled with light.”

Sounds familiar to me – what about you? A little Genesis 1:1 action is going on here.

Did you know that there is a pretty simple mathematical proof for a universe that had a beginning?

The idea of “infinity” is just conceptual and exists only in our minds. It is not descriptive of what can happen in the real world otherwise there would be absurdities like three equations subtracting an identical number from an identical number and getting three different answers. The universe cannot have an infinite number of events in it’s past. There had to be a beginning.

3) Therefore, the Universe Has a Cause

It follows then: given that whatever begins to exist has a cause and that the universe began to exist, therefore the universe has to have had some sort of transcendent cause. Even atheist Kai Nielson said, “Suppose you suddenly hear a loud bang and you ask me, ‘What made that bang?’, I reply, “Nothing, it just happened’. You wouldn’t accept that.” I imagine that, if a cause is needed for a small bang, one is needed for the Big Bang as well.

I relied heavily on Lee Strobel, The Case for a Creator, Zondervan, Grand Rapids, MI, c. 2004

iThere are no comments